When you are into tube audio phono stages and prefer Moving Coil (MC) phono cartridges over their Moving Magnet (MM) counterparts, then in most cases, you will need a decent step-up transformer to really appreciate the musical performance of MC cartridges with your beloved tube phono stage.

In early 2017, my friend Alex and yours truly visited Berlin for a long weekend to meet some of our audio friends, among them Frank Schröder and Thomas Schick. The weekend was a blast, as we had the rare chance to visit Frank Schröder’s work space, audition his musically outstanding system, listen to a lot of music from vinyl and share great chats and superb food with Frank and Thomas.

We also had the chance to audition excellent new MC transformers. Michael Ulbrich, a friend from Berlin since early ETF and Vienna Vibes days, has started to produce under the new brand name Consolidated Audio. Alex and I were so impressed with Michael Ulbrich´s transformers – a prototype version, which Frank Schröder demoed to us during our music sessions at his place – that we decided to contact Michael regarding these beauties once we were back home again.

And that’s what we did as we both wanted a pair of these wonderful step-up devices for our trusted tube phono stages. As Michael knows our audio systems and turntable arm combinations, he suggested winding two pairs of his silver solid core 1:10 step-ups for us, to test the difference between the two core materials he offers, i.e. Nano Crystalline core and Mu-metal core. We then could decide after some weeks of audition time what the final transformer of choice would be. How cool was that! 🙂

So, we took this offer and waited patiently for the parcel with the two step-ups to arrive.

Here is a bit of background information on Michael Ulbrich. As the son of a self-employed radio and TV technician, he often spent his spare time in his father’s workshop, and so grew up with vacuum tubes and electronic parts, like resistors, capacitors, inductors and transformers. With that influence, he later built his own tube equipment and learned how to wind his own transformers for his projects. In addition, Michael is an electrical engineer and the developer of a Digital Asset Management System for the media industry.

At the last Berlin ETF in 2014, I was really impressed with his SE 2A3 mono-bloc amplifiers, which sounded fantastic driving a Philips cinema horn loudspeaker system. Music over this system was big and impressive, with superb definition and resolution and the special musical flow, low-powered 2A3 SET amps are famous for. But the stability and punch I heard was not normal for a 2A3 SET amp. It stemmed from the huge output transformers Michael had wound for these amps – since the transformers were half the size of each mono amp, they had no space on top of  the chassis, so were connected externally to the monos. 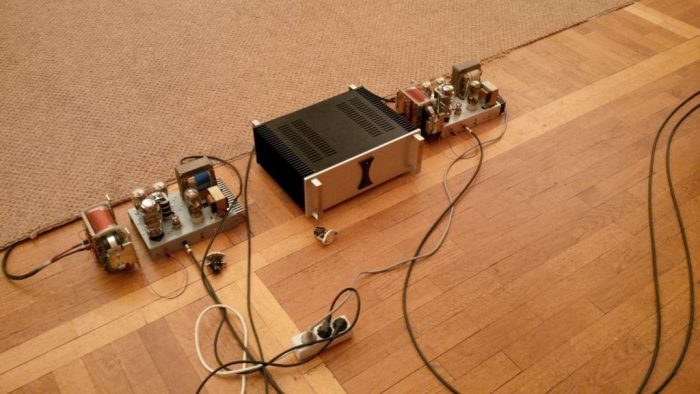 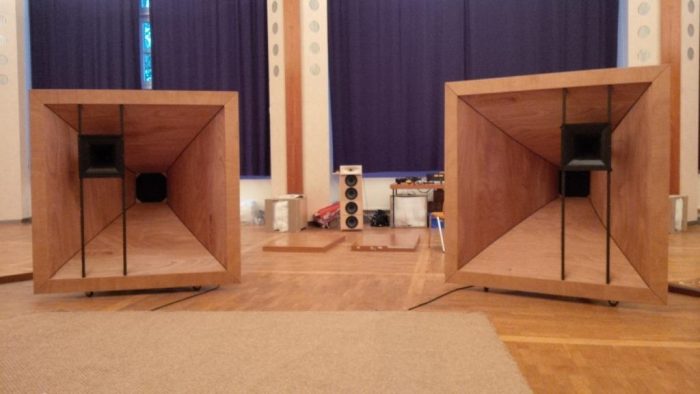 But back to Consolidated Audio and the top-of-the-range MC step-up transformers Michael Ulbrich offers under his new company. The parcel with the transformers finally arrived and was unexpectedly heavy. When I unpacked the transformers, I understood why they are called “Monster Cans”! 😉

I looked at two quite huge but very elegant anodized aluminum cans (in black and silver), measuring 12 cm dia by 15.3 cm height each. Each of the cans houses a stereo pair of MC step-up transformers, in our case with 1:10 step-up ratio, wound with silver solid core wire, one with a Nano-Crystalline core and one with Mu-metal – i.e. Hi-Nickel (80% nickel) core.

Quite impressive such a “Monster Can” 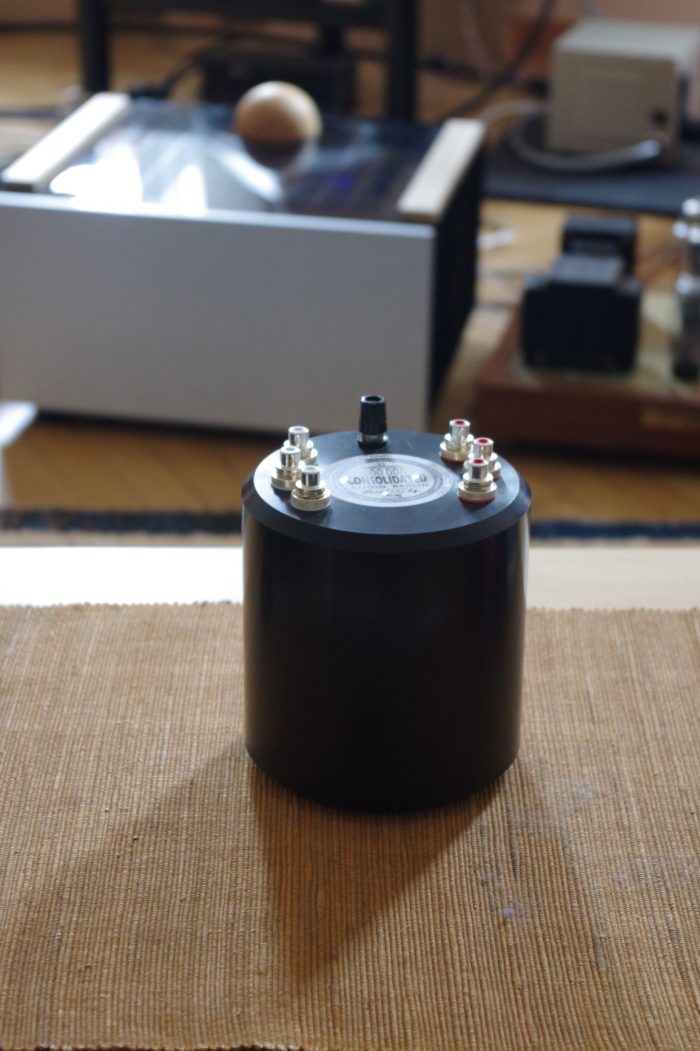 What makes Michael’s designs special is that, depending on the MC cartridge the customer uses, different impedance ranges of the transformer’s primary can be offered, since the inductance of this primary sets the low cutoff frequency in combination with the impedance of the chosen cartridge. So, for low impedance cartridges (impedance < 10 Ohms), he recommends a low inductance; for medium to high impedance cartridges (> 10 to < 40 Ohms), a high inductance is recommended. Or as a compromise option to support both types of cartridges, one can choose a medium primary inductance.

Michael also equips his “Monster Cans” with an additional set of female cinch sockets to give the customer the chance to fine tune the loading for the MC cartridge used. This is done by adding a resistor plus capacitor network soldered into a cinch plug – in parallel to the secondary of the transformer, i.e. in parallel to the cinch output sockets. Such Zobel networks are used to dampen a possible high frequency spike of, for example, a low impedance MC cartridge used. This is due to the not optimal load when using, for example, the “Monster Can” with 1:10 step-up ratio, as with 1:10 and standard 47k Ohm input impedance of the phono stage, the normal load impedance the cartridge sees is 470 Ohms (i.e. 47000 Ohms/102). A low impedance cartridge could, in such a configuration, be “under-dampened” and this could cause resonances in the high frequency range of the cartridge and could be perceived as a glare on violins or other treble rich music. Best is to try your cartridge out without any extra correction and then see what is needed.

An advantage is that, upon request, Michael will provide measurements for each of his transformers under different loads (i.e. using resistor values simulating different cartridge impedances) without and also with a suggested Zobel network. So, the results of these measurements show you what effects such a correction filter is supposed to have on the frequency response of the transformer/cartridge combination.

Ok, enough technical information, as I assume you want to know how these transformers reproduce the music from vinyl.

Well, what can I say, these are fantastic musical devices! 🙂

I have never heard my pimped EAR 834P tube phono stage as good as with these transformers. The built in 1:10 step-up trannies the EAR phono comes with are of good value and should have an advantage as they are directly soldered onto the audio board of the phono stage, i.e. have the shortest possible connection to the tube amplification stages of the EAR 834. But with the Consolidated Audio 1:10 step-ups connected via a short shielded cable to the EAR phono stage used in MM-mode, there is better defined and deeper bass as well as a lot more resolution and 3D ambience of the recorded space. A huge and believable stage of musicians is portrayed and the musical flow makes you just listen quietly, enjoy it or dance, depending on what LP  is on your TT. 🙂

The Mu-metal core transformers are a tad warmer sounding with a bit less resolution. The Nano core is more neutral sounding with the edge in resolution and finest details of recorded music, still superbly musical and without becoming the slightest bit analytical.

Alex and I had some music sessions together at my place to decide on the Consolidated Audio step-up he would finally pick for his system and cartridges, because it’s very easy to hear differences with my Haigner Gamma horns. So, he brought his turntable with him (a beautifully veneered Perpetuum Ebner Studio 33 with Schröder CB arm and Tzar DST cartridge) and we had a long and fun listening session. The 1:10 step-up worked perfectly for the Tzar cartridge, which is a rebuild of the famous and rare Neuman DST62 cartridge.

With some recordings, like intimate jazz trios, we both preferred the Mu-metal step-up for its fantastic emotional reproduction of music. For the majority of records though, the Nano core step-up won Alex’s heart, with its additional resolution and information as well as rhythmic, dynamic and open reproduction of music. So, at the end of our session, Alex decided to take the Nano Crystalline core version of the Consolidated Audio step-up. He stayed with the 1:10 ratio of the Nano core version we had at hand, as it fits better impedance-wise to his cartridge of choice.

Some days after this session, I also compared the Nano 1:10 version to my trusted Hashimoto HM-3 step-up with 1:20 ratio (the version with WBT Next Gen copper cinch sockets; price about €1,200), each of them connected to my EAR tube phono. The Hashimoto sounds big and a bit on the warmer side with my Lyra Skala and is definitely a step up in comparison with the built in EAR transformers. When compared to the Consolidated Audio “Monster Can” transformers, the music over the Hashimotos was smoother, but lacked some information and shadings in the bass and treble department. So, for me it was clear that the Consolidated Audio step-ups were musically in another league.

You need to listen to a classical recording with string instruments to understand what Michael’s Nano core transformers can do for your music. For example, “Serenades for Strings, Tchaikovsky – Dvorak, Neville Marriner conducting the ASMF (Argo ZRG 848)” is such a wonderful record. How the string section of the Tchaikovsky Serenade in C Major on side one is reproduced with these transformers is pure joy. The violins sing, cellos and contra basses resonate beautifully and have ease and drive – a kind of “feather-light springiness” – which makes this musical reproduction immensely enjoyable. So, the Consolidated Audio Nano transformer was a must to own for me, too. Finally, I decided to go for a 1:15 ratio version of these beauties, as the higher step-up ratio and medium primary inductance fits better to my cartridges of choice (Lyra Skala, Shelter 501 II and my newly acquired Hana ML – watch this space for a review of the Hana in the next weeks).

So, the Mu-metal core version was returned to Michael, and two months later, my 1:15 Nano core step-up arrived. 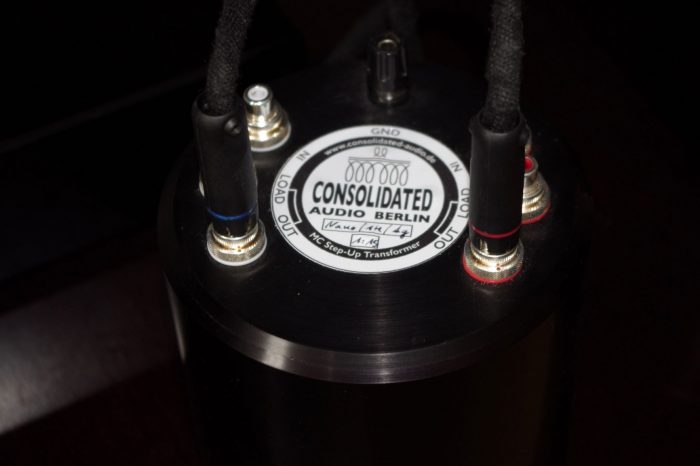 After some 100 hours of burn-in, I can whole-heartedly say that my vinyl system never has reproduced music in such a beautiful and emotionally-pleasing way. You just want to sit and listen to record after record and discover all of your LPs anew. Highly recommended step-up transformers!

In fairness, I have to say that Alex and I could get our transformers from Michael before he signed contracts with his current German and US distributors. So, due to this distribution network, the price of the silver Nano and Mu metal versions of these fantastic transformers are on the pricier side now (about €4,000 for a stereo step-up transformer in silver; a copper wired version will be a bit over €3,000). This is in the league of other highly rated MC step-up transformers like the Silvercore MC Pro, for example.

One could argue that a price in this range for “just” a step-up transformer is far too much as you can get excellent and musical transistor MC phono stages for about one third of your hard earned money (Graham Slee Accession or NVA phono 2 or 3 with separate power supplies come to mind). Fair enough, but if you are into tube phono stages, own a nice MC cartridge and have the money to spend, then Michael Ulbrich’s Consolidated Audio “Monster Can” step-up transformer is a must to audition! It is a keeper for many, many years to come. Long live vinyl! 🙂

PS: If you are into DIY and need some top-of-the-range step-up transformers for implementing into your tube audio phono project, get in contact with Michael. He most likely can provide the raw Mu-metal shielded transformers alone without the superbly made aluminum-housing and connectors for the internal implementation into your DIY phono stage for a more down to earth price. 🙂

Below is a photo of the trannies for internal usage with measurements (photo courtesy of M. Ulbrich):
Please note that the frequency response in the background is of a low impedance, 1:10 step-up transformer driven by an equivalent cartridge impedance of 3.3 ohms and loaded by 47 k. The peak at approx. 400 kHz shows transformer leakage inductance resonating with the lumped transformer capacitance. 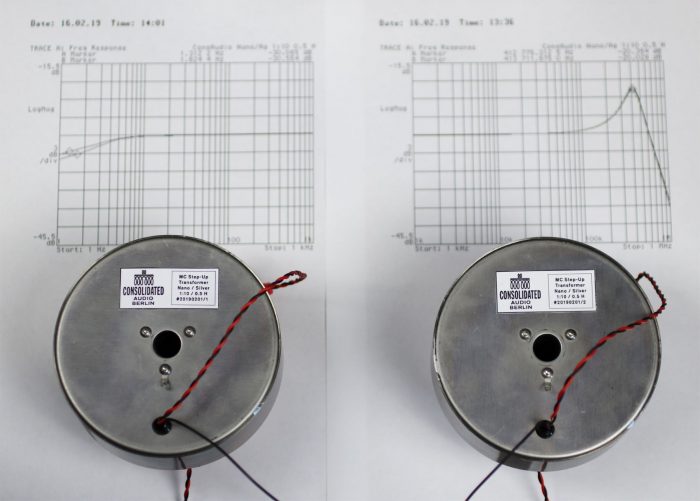 And here an impression of some of Michael’s “Monster Can” step-up transformers to wet your appetite ;-): 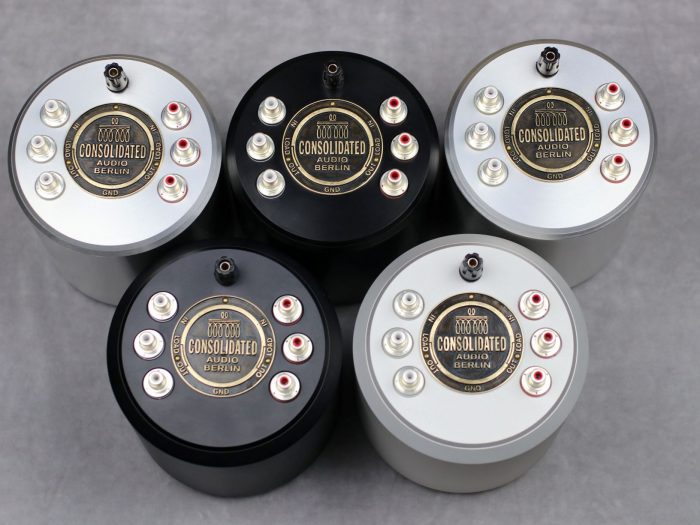